A stay in the beautifull Vallais. 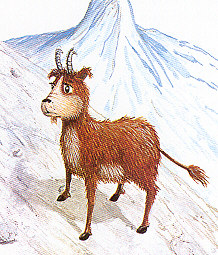 Some years ago Co stayed for a week with his very friendly and hospitable niece Ina, who lives at the city of Montreux in the Swiss Alps.
A beautyful countryside at the Lake of Geneva where late in the evenings the inhabitants tell their local tales over a good glass of wine from the Vallais.
It was on one of these colorfull nights that I was told about a mysterious animal which was only seldom spotted in the mountains: Le Dahu.

This Le Dahu creature walks spiralwise up the mountain (either clockwise or counterclockwise) untill it reaches the top; and down again in the same direction. Continuous age-long moving around and surviving on the sloped surfaces of a mountain has caused an evolution of this animal in the way Darwin once discovered on species at the Galapagos Archipelago. During centuries of inhabitance in steep mountainsides this Dahu has become a mutant with a shorter and a longer leg.

The next day, but not earlier than that the spirit of the wine had left me, I took off my artificial leg and tried to stand on a mountainslope myself. And it worked!
But with one important fact: you have to start with your nose in the right direction, otherwise on the spot you will roll off the mountain immediately.

The logical conclusion of this experiment is that there must basicly exist two different variations: rightsided and leftsided Dahu's.
Another part of the Dahu Saga I was told, is that the animal catches young maidens during his nightly stalks, to use these unfortunate girls extendedly for its own fierce, dark pleasures.
But to try out this quality of the creature will be opposed strongly by my wife, I'm afraid.

In my quest for a unique identity for my web-contacts I finally had discovered a perfect match with the features of the Dahu and myself: a short leg and a long leg. So at last the nickname for Co Appelman was found: Co Le Dahu! 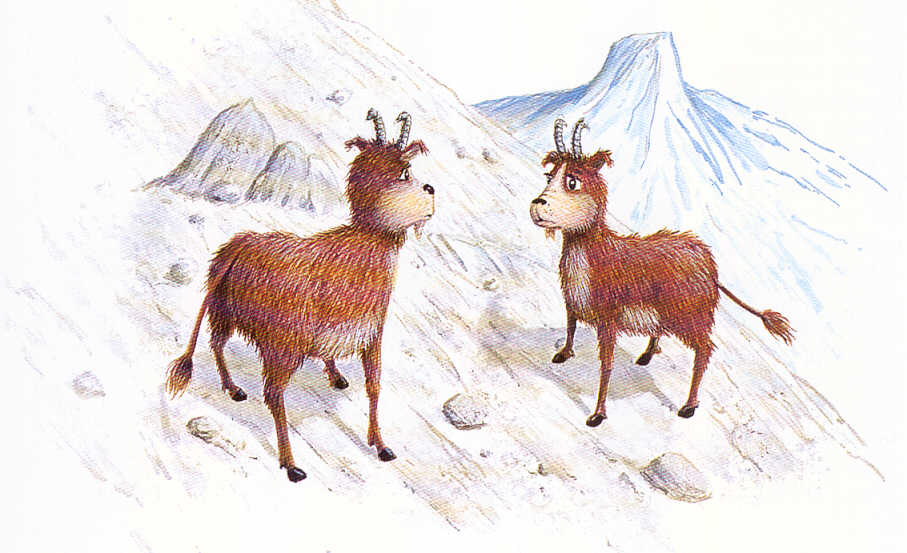 Later I made extensive study of available Dahu documentation and came to a more authentic description of what a Dahu looks like. Historical documentation revealed that the animal can best be described as a kind of Mountain goat, with on one side two long legs and on the opposite side two short legs. Only sporadicly the very shy Dahu will be spotted in the wild.
Some very old pictures have been found, showing Dahu's at various periods in the past.
There are pictures of Dahu's on fresco's from the ancient Roman times. Also known is a picture of Napoleon on horseback with a small Dahu on the background.

If breeding of both different varieties of Dahus works out wrong, this can result in either a complete shortlegged or a longlegged Dahu. On the other hand breeding of the two different variations of left- and rightsided Dahus is very unlikely without them falling down the mountainslope at the first try to mate!
There are Dahu stories which describe a frontal encounter of a left sided and a right sided Dahu on a mountainslope. Unable to pass by each other; or to turn around, such a dramatic event will irrevocably lead to death through starvation of one of the unfortunate animals. 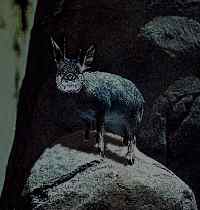 Very seldom the shy Dahu has been seen in villages or towns. It than moves cleverly with one pair of legs on the pavement and the longer pair of legs on the road so it can stay up right.
The hunt for the Dahu is described as follows: the hunter places himself behind the Dahu, who is grazing unintendly on a mountainslope. An assistent stays at some distance downslope and has a big opened sack ready. Now the hunter gives a sharp and loud whistle on his fingers. The Dahu will turn itsself in terror to uppose the danger and on that very moment it stands in an unstable position with its long legs uphill and will tumble down, right into the ready open sack of the assistent-hunter.
And see: the Dahu is deceived and catched!
More stories of Le Dahu can be read in the book "Le Dahu, Légende Vivante des Montagnes" part I and II from the author and illustrator Patrick Leroy (Editions Du Mont; Annemasse, France; ISBN 2-9508216-4-2)