Commuting on the NightHawk. 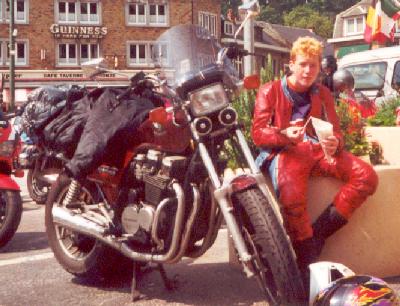 If one loves riding motorbikes as I do, one rather likes to mount the bike sattle than to step into the car. For me there must be serious objections to leave my bike at home.
For instance bad weather; transporting large or heavy objects or the necessity to wear decent clothes are possible reasons.

I had a perfect motorbike at my disposal: a Honda CBX-650 Nighthawk, as a matter of fact my wife's bike.
I had sold my own motorbike half a year before, a Yamaha Fazer FZS600 and borrowed her bike for everything possible: a short tour when the weather was fine, holyday trips in the Ardennes; but mostly for commuting the 24 kilometers between home and work on beautyfull roads through the woods.

Februari 27, 2001 it was a nice, dry day in the early spring and the family needed the car for a relative's birhtday visit. Reasons enough for me to jump on the bike to ride to my work.
After workingtime it's marvelous to feel the wind through your open helmet while driving relaxed along the forestroads between my work and home.
Particularly on thuesday, when closing hours for me was, after a long workingday as late as half past nine in the evening. So I rode at a relaxed speed along a two lane road, relaxed indeed because in those woods I was always at attention for unexpected crossing game as wild boar or deer, especially in the night. 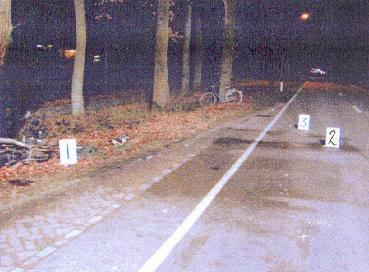 About one kilometer before entering a small village along the road, I was approached by three oncomming cars on the opposite lane. At the instant the first car was about to drive by, the last one started an unexpected manouvre to overtake the car in front of him on my lane!

I cursed in my helmet, started to brake and avoid the danger. but at the same instant I realised myself that there was no time and room to avoid the colission. Instinctively I let go of the breaks and started to stand upright on the footpegs of the bike.
One time, on an advanced riding course I was teached to do this action if avoiding a collision wasn't possible anymore. And probably this move has saved my life. 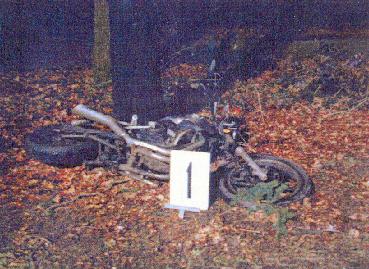 On that very instant I felt the terrible clash of the frontal collision with the car.
I was catapulted over the car and crashed on the tarmac with the exploded and burning Nighthawk against a tree at one and a half meters from me. One way or another breaking the fall I layed there stupefied.

What I remember perfectly is the heavy impact of my body and the chocking feeling on my chest afterwards; because of the clash with the automobile I couldn't get any breath.
Had I crashed into a tree, or in front of another incoming car, my situation would have been much more worse.

Luckily the second car stopped right after the accident and the lady driver ran to the closest house to get help.
She didn't pay closer attention to me while she thought there was no way for me to have survived such a collision and did not want to be confronted with a dead victim.
But when she returnd, she could hear my groans and realized I was still alive and started first aid immedeately.
I did off my helmet without help but could not get up.... hardly even couldn't move at all. 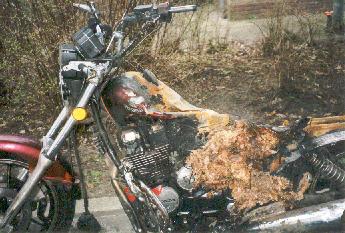 Pain came through my brains very dull, but I had the feeling that something was seriously wrong with me. Breathing was still very hard to do.
First on the spot was the firebrigade who put me in a stable position and set up roadblocks. The waiting now was for the ambulance to arrive from Apeldoorn, about 18 kilometers away.
More and more I had periods I lost concience and everything around me fading away.
But untill this moment my memories of the whole accident are still very clear in my mind, more like a sequential series of pictures.
Pictures of the incoming car, the clash of the collision, laying on the tarmac and the tansport with an ambulance to the "Lukas" hospital at Apeldoorn.
After this, everything became dark.