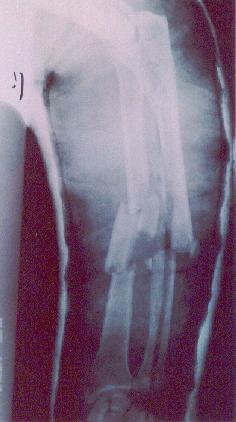 Multitrauma they call it when, after an accident you turn up on an examination table of an hospital like a sack full of bones.
Ofcourse every action will be taken from this moment to get clearness in this critical condition by x-rays and other exminations.
How this hectic situation that very evening was for me, when I was brought into the "Lukas" Hospital I can't tell. I was there, but far out unconcious by the vast loss of blood.

Reconstructing afterwards, around half past eleven the first X-rays were made of my head, neck, spine and pelvis areas. Unfortunately this haapens to be a nescessary standard procedure for bike-accidents because of the high chance of fractures in these parts of the body.
At the same time an alarming loss of blood was diagnosed en immediately I got blood transfusions. 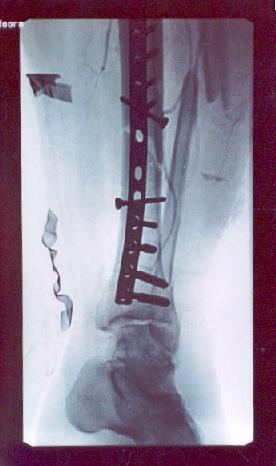 Right after all damage was clear the surgeries started. In the meantime my wife was notyfied by the police and brought to the hospital in a hurry. My condition was very critical and everyone was prepared for the worst.....
My mother and family were notyfied as well and everyone was waiting through the night.

Sometime during the operation the hospital ran out of blood and halfway the night an express delivery brought new blood from another hospital in the surroundings. The total amount of blood I received during the operation was 20 half-litre sacks.
A long night of tension and waiting went by slowly and around half past five in the morning the surgeons reported to my wife and the others: After more than five hours of intensive surgery my condition was stable. The damage: heavy fractured left leg and left arm, but luckily no serious internal damage, nor damage to the head, neck, spine and pelvis.
Considering the seriousness of the accident a fortunate diagnose; all had expected a much worst message.
I was transported to the Intensive-Care room.

At the IC ward I was kept asleep. After three days I woke up and I was moved to a regular nursing ward. All possible damage was established and my condition was not considered as critical any longer.

It was not earlier then at this moment, I learned from my injuries and the way I got them. The shattered limbs, but I also suffered from damaged nerval centre in my left shoulder which resulted in a completely paralysed left arm.
But apart from this injuries I considered myself very lucky to have survived such a major crash!

My outstanding fysical condition before the accident has played a major role in surviving the crash and in the prosperous healing proces, which was allready started at this moment.

During the next ten days I underwent more surgery and examinations and the decision was made to move me to the Sofia Hospital at Zwolle. This hospital had a team of expirienced plastical surgeons, specialised in the reconstruction of trauma injuries.
They were consulted to make a reconstruction surgery to remove the right abdominal muscle from my belly and transplant this in the damaged calf to fill up the teared-away tissue.
This muscle would be transplanted and be attached on the blood circulation of my lower leg in one surgical operation. Once this was established, following treatment would be nescessary for a reconstruction: skin transplantation and lengthening of the tibia in an number of follow-up surgery.
The lower limb reconstruction wouldn't be a simple operation, but with my strong and healthy condition it had a good 95% percentage to succeed; the docters assured me.

Further treatment for preparation on the operation was very painfull. Luckily my morphine IV, which I had from the first moment was still continued.
My calf was opened up to the tibia from the knee to the ankle and it was even possible to look sideways under the tibia from one side to the other. Helping in staying the pieces of the tibia together an external fixation was attached on top of my lower leg. My fibula was shattered beyond reparation so it was removed earlier.
Twice every day the wounds had to be unpacked and cleaned. In spite of the morphine IV I suffered awfull pains. 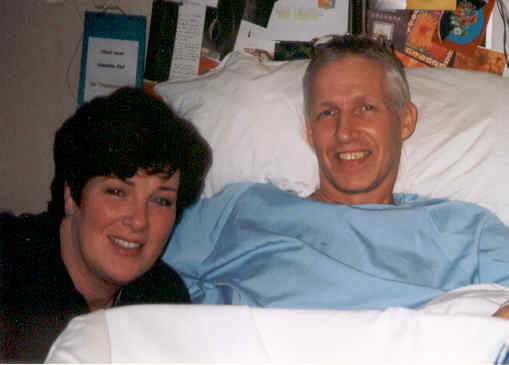 My wife came to see me every day, sometimes even twice during all those terrible hospital experiences.
Her laugh, as she entered the room, enlightened my day. Her love and care, and of my children as well ofcourse, were Very important for me to get by in these miserable days.
I got lots of reaction of relatives, friends and collegues. An amount of many hundreds of letters, cards and e-mail messages. So many telephone calls that my wife often had to pull out the telephone plug to get rest.

I still keep four books full of reactions and everytime I look them in I still get that warm feeling of closenes with all that nice and caring people.
The sympathy of the immense procession of caring people has pulled me out of the misery as a chain of human links during those months.

The guy who caused the accident never sought any contact with me afterwards. His mother phoned once or twice, but that was it. After about one and half year he was convicted for a 1000 euro penalty and 2 years on probation of withdrawal of his driving-license.
I hope he learned to behave more carefully in traffic and for the rest: F#*k the uShOhhBee!

Before getting the reconstruction surgery with the implanted abdomen muscle, some more surgeries where needed to remove dead tissue from the open wounds and some more medical examinations were needed.
All nescessary to prepare for the big event to repair my injured leg in order to be able to walk again. A month after my accident the big moment was there, everything was ready for the plastic reconstruction operation. Everything looked good for a prosperous progress in my recovery proces when I was placed under anaesthesia....