At last: Cut Off the Leg.

No other options left.

Waking with a smile on my face from a deep sleep the first I saw was my wife sitting next to me. But strangely she didn't smile at all.... after all everything now would be ready to start a new phase in my recovery? 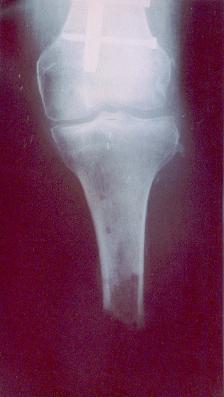 The operation had failed, she told me. After a thirteen hours long time of surgery, connecting the abdomen muscle to the blood circulation of my injured leg had completely failed. My muscle was lost and I still had my damaged leg.
The surgeon sat at my bedside defeated and exhausted. He explained the encountered problems and told me the options left: a new attempt to implant a shoulder muscle into my leg or..... amputation.

But, amputation? That option hadn't come up before. My situation had been that good, that a failure like this wasn't considered at all.
I asked for a rehabilitation specialist to get detailed advice, for what did I know about amputations..... virtually nothing!
This docter advised for an amputation through the knee: a knee-exarticulation. Because he expected many complications in the event of a lower limb amputation as result of the extensive damage from the accident.
It would require a long and complex rehabilitation proces.
How right he was in this judgement would be clear afterwards.

My decision had been taken quickly, I saw no good in extensive surgery with a new muscle repacement.
Besides that, the surgeon could only give a minimal chance of succes for the implantation of a muscle from my back to my leg.
So after discussing this with my wife we both agreed on a knee exarticulation. The operation would be done immediately and I was sent to aneasthesia-heaven once more.

Waking Up in Pain.

I woke up in terrible pains, which did not decrease in spite of the continuous IV morphine pump. Like I was drifting in a pool of pain, enclosed by agony. I felt I allmost drowned in this pool-of-pain. This went on for hours and exhausted I asked to get under aneasthesia again.
Once again I woke up and this time the pain was more bearable.
I realised that from now on my life would look completly different from what it had been before..... as a criple with one leg.
My wife sat next to me and we quietly held hands together for a long time. 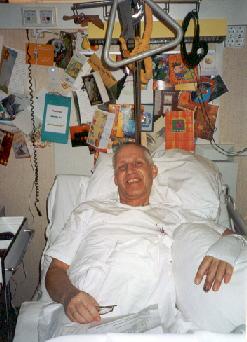 For the next few days I stayd alone in a seperated room to get used to my situation and my changed body all by myself.
Another shock came when I found out, that on the operation table the docters had decided to amputate below my knee instead of to seperate my knee joint. My knee was too much swollen and considered as damaged and possibly infected. To cut in this area could have given a chance to lose my knee as well when due to complications higher amputation would be nescessary.
So the time coming I would be confronted with extended stump reconstructions because of the vast wounds in the amputation area.

Sensibility and mobility of my left arm was increasing after very painfull treatment of the physiotherapists. Steady moving and sleeping with an orthesis, and especially doing my daily exersises gave me back only the crude movements in my arm. My hand was something more difficult. moving my fingers started with the little finger first . Gaining movement came very slow and very painfull.

During the Easterweekend I was able to go home for a day and a night. My wife had managed to get ready the nescessary equipment as a bed etc. in the living room and when I arrived home, everyone was waiting for me.
It was all like in a dream... I felt like a ghost to be in my familiar surroundings... when I should have been dead after such a serious accident.
But I really lived! There, among my beloved family, I discovered a new dimension of the idea "feeling home".
What a beautifull warmth and love enclosed my here!

After 30 Years Again: Fighting to Survive. 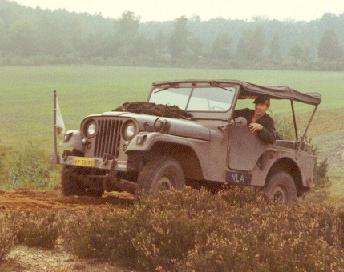 Two important sources fed me with optimism and energy to fight the pain, sorrow and set-backs throughout all these times.
As I mentioned before: the love and compassion of my family, relatives, friends, (ex-)collegues, businessfriends and all other people who came to visit me unexpectedly.

Another very important lean up in this difficult period was thinking back to the time in the Dutch Army Special Forces, when I served with the Green Barets at the Corps Commando Troups.
Those were months of heavy physical and psychological training for the final goal: the right to wear the Green Baret. Hardship, carrying on to the extreme of one's possibilities; for me this hard times have been a support in various difficult periods during the rest of my life.
I'm glad to have finished the heavy courses of training to become a Commando then, as a 20-year old youngster. Which gave me the strength now -more then 30 years later- to continue fighting for my health and future.
A Commando once is a Commando forever!

It would last untill more then a month after the amputation, before the final operation on the stump would be possible. A week after the amputation to everyone's shock I severed a 'blow out" of an artery just above my left knee. The artery bursted open and caused an internal bleeding in my stump and leg with a terrible pain and feeling as my leg was ripped open up to my tight. I was transported to the operation room immediately for emergency operation.
Later on, this event would appear to be the cause of serious bloodcirculation defects in my stump.

The next three weeks I underwent more surgery to clean the dead tissue off the amputation wounds for the preparation to the final reconstruction operation: the covering of the stump with a layer of transplatated skin. In the meantime the open wounds had to be cleaned twice a day, which was very painfull.
A month after the amputation the stump was ready for the skin transplantation, with donorskin from my left tight. A surface of about a A5 papersheet.
I had to wait about five days after this reconstruction surgery it to know if the transplantation was well accepted on the stump.
Luckily it appeared that everyhting hed worked out fine.
So at last, after a total of thirteen operations in a little over two months I was ready for the next step: the transfer to the Rehabilitation centre.