To Fall And Get Up Again.

Standing Up And Strugle. 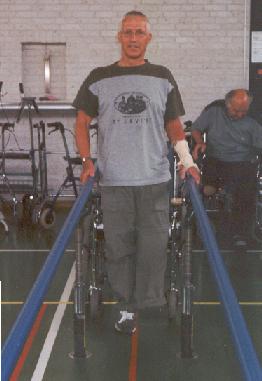 How to get a picture of a rehabilitation centre if one hasn't been there never in one's life?
How could I possibly walk with my painfull open stump? I wasn't even able in bed to just turn to my side.
I had no idea what to expect of rehabilation treatment.
Packed and tied up in my wheelchair I was transported to "De Kastanjehof", the rehabilitationcentre in my hometown Apeldoorn
There I was installed in a room with three other rehabilitation patients. Most of the other inhabitants were older people.
I never have known that only 3% of all amputees in The Netherlands lost their lims because of a trauma. So by far the biggest part are amputees as a result of heart and vascular diseases, diabetes or cancer... mostly older peole. Very slowly the therapies started for me. First to mobilise my left arm and hand, while my amputation wounds could be taking care of to heal.

During the weekends I stayed home and slowly, little by little regularity came back into my life. I had to get used to my changed role in the family. Father, so active and allways present, lay helpless in a bed.
My son Mike and daughter Margot handled my handicap very well. They treated me the same as before the accident. Daddy simply stayed daddy and they slowly went on with their own lives again.
They had their grief ofcourse, but they didn't act differently towards me. Were as sweet and concerned about me as before... no, more ofcourse, but not in a pityful way. For them I stayed the same person, in spite of my handicap. And that's how I liked it most. What a lovely children!

My wife took care of me with endless love and devotion during those times.
But she was also rather concerned, especially when I was home alone. I'm a little bit self conceited and I do what I want to do; even when I'm not really able to do it, which sometimes works out wrong.

Ofcourse we also had many sad moments however, despite the situation we laughed together many times. And that's the best medicine there is!

As a result of the open wounds on my stump I could not walk with the temporary prosthesis with an air-cushion fitting, that is regularly used to start with, right after the amputation.
So I was restricted in the methods of rehabilitation. Walking was out of the question and I started training to get my musclepower back that I lost after all those months in the hospital.

After some time little drups appeared on the surface of my stump. X-ray examinations learned that I had an infection in the tibia, deep in the stump. 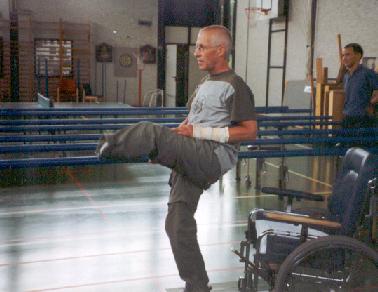 It was a fistella, a channel between this infection and the surface of the skin. Another complication which made wearing a prosthesis impossible.

To train my right leg I stood between the parallel bars on one leg. I couldn't move because my left arm and hand were unable to support my weight. So I could just stand like a stork and try to keep my balace; also while bending my right knee and moving my upper body.

I had to get used to not having my left leg to stand on anymore. Some moments I completely forgot about my shorter leg while trying to stand on two legs. Then I fell over, waking up on the floor puzzeled and in pain. All begin is difficult!
Therapists worked on my arm and hand, trying to improve mobility and sensibility. The first with more and more result but with no gain on the last.
My shoulder was stucked in its movements as result of my paralysed arm. To mobilize this joint again, was a timeconsuming and painfull.
I learned tricks to deal with the resticted movements of my hand and fingers, to do as many things as in the past during the normal daily activities as whashing, shaving, brushing teeth etc.
Later on other activities like cooking, housecleaning etc. where teached by the ergo-therapists.

Vacation in the Hospital.

After some time it became clear that the fistela could not be healed with just medicines. In the summer of 2001 I was hospitalized once again for correction surgery of the stump. The source of the fistela appeared to be one of the holes of screws, used to attach the extended fixture on my shattered leg before the amputation.
After the operation I had to stay in hospital for four more weeks because of the posttreatment with antibiotica against the infection.
When I returned to the rehabilitation centre, the decision was made to spare the stump from external pression for a longer time. Better was, to start with an interim prosthesis which took all the load of standing on the knee and upper-leg and kept the transplantate area on front of the stump free.
It would be a prosthesis ofh which my knee joint would be locked, called a "Chimney-pipe". With this prosthesis I would at least be able to walk again without having to wait for the tansplantation skin getting strong enough for the pressure of a lower limb prosthesis socket. 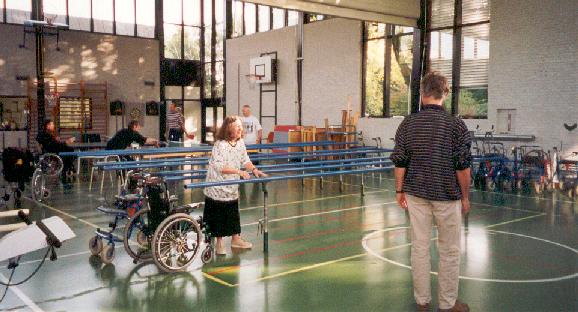 I've spent many hours of in the large rehabilitation gym of De Kastanjehof.

But after five months I was getting tired of staying between mainly old fellow inhabitants and it was getting time to move home again.
In the meantime I was teached everything nescessary to get along in wheelchair and crutches and be able to handle most major problem which I could expect with my shortcommings as an amputee. Time was ripe for going home and continue rehabilitation on a daily polyclinical base.
Beginning of Oktober 2001 I was dismissed as an internal patient of rehabilitation centre "De Kastanjehof" and went home.