Back in the World of Bipods.

With Wheelchair and Taxibus. 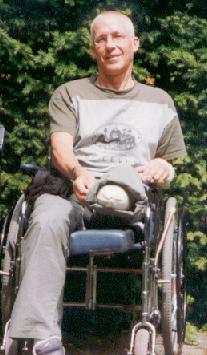 Ofcourse my rehabilitation went on every day when I was back home, however now as a polyclinical patient.
Every day I was picked up from home and brought to the rehabilitation centre and back again by cab.
I underwent some more surgery on my arm, the broken Ulna wouldn'd heal well so a metal plate had to be attached to reinforce the crack.
Due to the intense treatment and self-training the mobilisation of shoulder, arm and hand improved slowly.

It was strange to be part of the family life again after having been from home for more then seven months. With my fysical and psycological limitations I slowly had to obtain a different, new role for myself within the family.
Limitations which were obvious, like my amputation and left arm. But also limitations that were less visual and not clear even to myself.
My Mijn tiredness, grief, dull-headedness, phantom pain.
I had to talk a lot and make others clear where my problems lay and what my changes were.
Slowly my wife had to decrease her care and help for me to let me find out how to solve problems on my own, to find my own ways again; to trust on my independance again.
She did great, my dear wife. In spite of moments I crossed borders and things went wrong. Like falling out of my wheelchair or from my crutches.
Slowly the family got used to a changed husband and father.

The fistela was gone after the operation, but instead I got another one somewere else on my stump.... even wider and deeper.
So deep, that twice a day I had to rinse it with liquid from a syringe through a long tube to keep the channal clean so it could slowly grow shut.
Another complication appeared on the spot of the removed fistella: the skin was grown together with the tibia and had to be massaged to get loose again; another very painfull treatment.
So it turned out that I wasn't ready for the fitting of a final prosthesis at all for the following time... I had to keep my patience for a while and stay with my old "chimney pipe" for walking.


Got My Driving License Back.

The validity of a driving licence stops when the owner gets a limb amputated so I had to apply for a new one. There were no seriuos limitation in my amputation so I was able to drive again in a regular auto-shift car. After some lessons I apssed my test and begin 2002 was allowed to drive again. So I instead of taking cabs every day I could drive by myself again.

After several months the fistela was grown shut and time was ripe for a new prosthesis instead of my well used chimney pipe.
At last I would be able to walk again using my own knee-joint. Months-long walking with a stiff knee could result in wrong gait-technics and that would be difficult to change into proper technics.
My new prosthesis gave me a a much better feeling than the chimney-pipe en bending the knee was great for walking, sitting and driving teh car. But walking looked terrible, I had to improve that a lot with training under supervision of my therapist. And I had to practice a lot to get more strength in my left leg and pelvis area.

The grown together skin was still attached to my tibia so the painfull massage had to continue for longer. But at last the docters decided that surgery would be the better solution so I was cut up again in Hospital. Good solution, but this ment to heal again and delay of my therapies and walking excersizings.

In the meantime I continued rehabilitation with treatment of shoulder, arm and hand. I learned wood turning and made some very nice pieces of work. I continued working out in the gym with fitness machines and learned to play table-tennis; all these activities in the wheelchair but later on with my prosthesis as well.
With ergotherapy I learned trics to do things with my left hand and to handle my loss of sensibility.

In the meantime a year had gone by after my amputation so more and more I considered that working again would be good for me; as a matter of fact I still had good contacts with my employer and collegue.
So my together with my employer I started a plan to reintegrate in my former job again. At first I would try to work on the thuesday afternoons and so I tried. But this appeared to be more difficult than I expected.
Some thuesdays I had therapy, had to visit docters, or I simply felt too tired. What I realised more and more: often I was exhausted after half a day of intensive rehabilitation. Or sometimes even after waking up in the morning I felt to tired to get out of bed.

I had to get used to living with only a part of my energy and possibilities of before the accident. Many daily actions, which I always did without thinking, cost me a lot of energy now.

More then two years of rehabilitation.

After the spots of skin which were grown on my tibia were loosened through massages, I could intensify my gait-trainings again.
Because of all activities the stump was shrunken so the fitting of the prosthesis-socket wasn't well enough. It was time for a new -my third one allready- prosthesis.
This time the choise was for a thick silicon liner to take extra care for the transplantations and to not dammage the skin on my stump in the area's around scar tissue. My gait technics improved quickly of all training and everyone was enthousiastic about my progression. I had rehabilitation therapies on a daily basis.

After a few months my walking technic was on a level that I was ripe for a more "active" kind of prosthesis. I myself wanted a sportive prosthesis right from the start but first I had to prove that I could use one.... and so I had.
After advice from the Össur supplier in The Netherlands a prosthesis was composed for my needs and abilities to make an active future possible for me (for specifications see the page "Prosthesis Used By Co LeDahu").
Unfortunately walking with this prosthesis turned out to be a disappointment. The used material was good enough.... but my stump wasn't. The pin-and-lock system put too much stress on the end of my stump and when I started to use the prosthesis to walk longer distances I got painfull cramps in my calf, knee and upper leg. The maximum distance I was capable to walk in one time was not more than 50 tot 70 meter. After that I had to rest. And after some time I got open wounds on my stump which wouldn't heal anymore. At that time I couldn't use a prosthesis at all anymore....

With all complications and delays in my recovery my rehabilitation in "De Kastanjehof" wasn't even ended after more than two years by July 2003. From that moment on, the therapies were temporarily stopped awaiting further examinations and reconstruction surgery on the stump.
After the surgeries and recovery rehabilitation would be continued.