From one complication into another. Lost Leg, but also:

Cotton-wool in my head.

Slowly recovering I realized that my head hadn't survived the crash without damage. With this I don't mean my appearence, which never has been good looking. But that's another story.
My problems: there's a permanent noise like a flock of birds in my head, constantly chattering birds. Often only in the background and not much disturbing. But sometimes louder periods when other sounds are suppressed. Then I can't hear my telephone ringing or it's difficult to follow conversations.
Tests from a hearing specialized docter resulted in the conclusion that bloodvessels in my brain were damaged from the accident. I will keep this ringing in my ears for the rest of my life said the docter. Nothing to do about it. My hearing ain't bad, it's just that the ringing sometimes deafens other sounds.

People who knew me well from before the accident saw more changes in me. Like getting tired after a short time and forgetting things. A bit like you see with a Whiplash victim.
This was examined as well by a psychologist.
A long time examination which took one and a half week extensive questioning. The end conclusion spoke of a decreased concentration and bad short time memory.
When I have to do many fine-mechanic actions or activities with high active strain; after a half hour already it's as if I have a head filled with cotton-wool.
The psycologist has teached me some tricks to handle my problems. But it costs me a lot of energy and is very annoying to live with and it won't get better in the future. I have never been like that before the accident.

Poltergeists in my foot.

Do you know those stories: that you can feel your amputated foot? Well, they'r true. Phantom feeling or pain that is called.
I have experienced all kind of feelings in my-leg-which-wasn't-there-anymore. Itching, burning, cramps, throbbing, nervous spasms, cold feet, splinters. Oftenly I feel a burning pain sensation under my middle toes. Whene I have been active with my prosthesis. When I've trained intensely or walked for some time.
Once I felt a wet phantom foot when I stood with both feet in a puddle.
From the vibrations of riding my motorbike (no surprise: Harley-Davidson) I feel tiredness in both feet and legs.
If not wearing my prosthesis, the phantompain is less. Sometimes intensive cramps shoot in my stump unexpectedly and then I'm temporarily shut off from the world. Looks funny for the peaple I'm talking with on that moment. Then I shut my eyes to digest the pain and let it flow away slowly.

After some time the transplantated skin on my stump appeared grown together with the tibia. Up and around those sticking spots wounds appeared which is not good for walking with a prosthesis.
First try was massaging of the skin in order to make the layers loose. Which was very painfull and did not work in the end. After months of massage treatment the decision was made to loosen the skin by way of surgery.
But after the operation the scar tissue growed together again so that hadn't worked out either. Best solution was walking with a tight silicon liner in the prosthesis socket.
After some time the constant massaging during the movement of walking loosened the skin layers.

Fall 2003 in the stump muscle tissue was grown together with the tibia. Only option to get this loose was reconstruction surgery.
Open wounds appeared on the tibia point in the distal section of the stump. A spot of about two inches refused to heal at all for half a year already. So to avoid infections it was not wise to wear the prosthesis during that period.
End of 2003 two options were left to improve the situation of my leg: intensive surgical reconstruction or removal of the stump together with the knee-joint.

Before the permanent wounds had occured I was able to walk longer distances with my prosthesis. But each time after walking a distance of 30-60 meters I got a terrible pain from cramps in my calf. Radiating in knee and upper leg id made me unable to walk for another step at all.
Waiting a few minutes for the pain to vanish helped and I could walk again, but a shorter distance.

First thougths were of a too tight fitting of my leg in the prosthesis socket. The socket was altered in small steps but without any improvement.
Then one of the physiotherapists saw resemblance with the claudication intermittance phenomenon. A disease where blood vessels in the lower limbs slowly grow narrower from obstuctions. Occurs oftenly with strong smokers. That's why they also call it smokers legs.
Only, I'm a non-smoker and my blood vessels were in a very good condition, according to examinations during surgeries.

Angiografic contrast pictures made the problem clear: The big femur-artery in the upper leg had dissapeared about ten centimeters above my knee. No wonder healing of wounds in my stump was slow. No wonder I got cramps when walking. The muscles in my stump couldn't get enough blood and ran out of oxygen after a short time of work.
The contrast pictures showed the development of collateral vessels under the damaged artery to transport blood to the muscles by alternate routes. I was very lucky again to have such a healthy condition! The formed collateral vessels appeared to be sufficient for transport needed for static bloodprovision, but insufficient for more active blood demands. On the Angio picture the collateral vessels are recognized as "corkscrews".
Reconstruction of the artery system by surgery is not possible. Best solution is follow a training program for claudication patients which consists of walking through the cramps in order to blow up the collarteral vessels. Requires intensive walking every day. Not possible with the condition of my stump at that moment. So, first needed was a stump reconstruction which would make it possible for me to burden the stump with extensive use.
But more important was to first examine if the bloodsupply is good enough to operate upon the stump.
Important to know, otherwise surgery isn't an option at all!


Transposition of a flap of skin tissue. 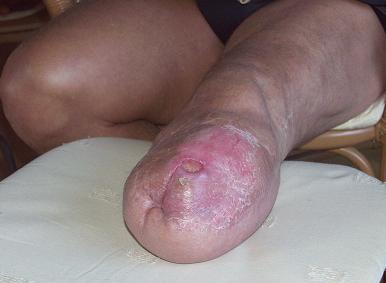 I went to professor Rouwerda of the Free University Hospital in Amsterdam to examine the possibility of surgery on the stump and if possible: an artery reconstruction. This hospital is specialized in artery problems and surgical solutions. The bad news was: nothing to do about the lost artery. But lucky for me, professor Rouwerda saw no problems in stump reconstruction surgery. The blood circulation was sufficient for a good healing proces.
The plastic surgery I needed for the stump was examined in the Sofia hospital at Zwolle and a plan was made for the operation.

The original skin transplantate after the amputation was too sensitive to wear my prosthesis. I had muscle-, skin and bone tissue which was grown together. The tibia end was too sharp and damaged the covering tranplantation skin.
So I had a stump too damaged, too sensitive and too bad formed to go on with my prosthesis.
The transplante was a thin flap of skin, attached on the frontside to the open tissue of the amputated leg.
A free flap skin tissue, got from my upper leg. Free flaps of grafted skin are very thin and do not have the strength of complete skinlayer. Won't grow any thicker no matter how long you wait. Constant friction, pressure and humidity in a prosthesis socket askes a lot of the skin. In my situation the transplantate wans't strong enough. The cause of my complications.

September 2003 a new transposition of skin was nescessary. The choise was not for a free flap this time, but for a linked flap transfer.
Whith this method a flap skin is partly taken off the donorspot(my right calf) compleet with vasculair system and attached to the target area (stump). During time needed for the skin to get grown on the stump, both legs will stay together by the linked flap. Bloodsupply is taken care of through the connection.
After 3 to 4 weeks the legs are separated by cutting-through the flap. From that time the stump has to provide the bloodsupply for the tranplantated skin.
A rather drastic and painfull, but in the old days frequently apploid method of transplantation.
In my situation the choise was made for this method.
Read more about the operation on page News 2003.


Arm and hand as well.

As soon as the complete story of stump reconstruction surgery, healing, fitting of a prosthesis and rehabilitation is ended, my hand has to get attention.
After the accident my arm and hand were virtually paralized. With fysiotherapy I gained a lot and most of the mobility had come back.
Only my left hand will not recover. I can move my thumb, index- and middlefinger only partialy and have lost my sensibility in this area as well. Won't get any better in the future either.
The specialized professor Blaauw from Heerlen in the south of The Netherlands has examined the loss of mobility and sensibility and established the source of the defect as a Plexus Brachialis trauma. A dammaged nervous center in my shoulder from the clash with the car.
Surgical reconstruction of the dammaged nerves is ot possible. Reattaching the tendons of the immobilized fingers to good working muscles can give back movement of the fingers partially, but does not improve the loss of feel.
This operation can only be done after I am able to walk again independently without the use of crutches. So only after my complete rehabilitation with my prosthesis.


At last my Knee.

With my accident the front and rear tendons within my left knee were torn lose from the joint.
This was told to my wife right after I was brought to the Intensive Care ward the first night after my accident. At that time it was the least of my injuries, of course.
However, when I started walking again this injury was playing a role more and more in my limitations. Standing up or balancing with a bended knee; walking up and down the stairs; it all causes more or less pain in my knee joint.
A less important issue in my recovery in this stadium. But in the end of my rehabilitation this has to be examined further in order to get apropriate treatment or surgery for optimal moving my knee again.