What Prosthesis have I got.

Different prosthesis for various stages during my rehabilitation. 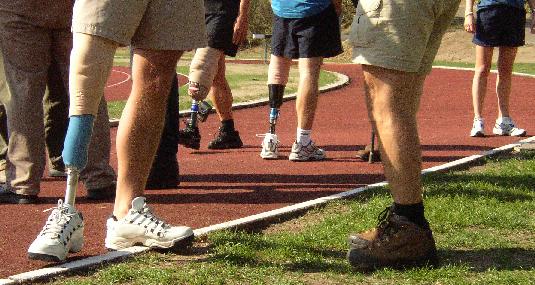 Because of all the problems with my stump after the amputation, I wasn't able to wear a conventional lower-limb prosthesis. My rehabilitation physician prescribed a temporarily prosthesis.
Not wearing any prosthesis at all during the long period needed for healing, wouldn't be good for my muscles and motorial abilities.
This interim prosthesis was basically an upper limb model, without a movable knee. The points of support were just under the knee (condille) and also clamp pressure with ski-locks on the upper leg. My vulnarable stump had no further pressure points, which was the initional starting point.
Unfortunately I do not have a picture of this "chimney pipe", but it was heavy and clumsy whith its stiff knee. Sitting in a chair or in the car was a problem. But I handled it well, walked good with it and could even balance, standing on this stiff leg only.
For more than half a year I walked with my chimney pipe, it really was a good plan of my rehabilitation docter after all.
A point of attention was the different way of walking. Because of the stiff knee, all lateral movement needed for swinging the leg has to come from the pelvis, or from swinging sideways. When getting used to this movement, it's hard to learn a normal gait when later the use of a movable knee prosthesis is possible again. 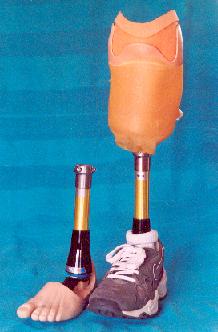 After all infections were healed, I was ready for wearing a real lower limb prosthesis.
At last I would be able to bent my knee, walk properly and maybe do some sporting later on.
First I wore regular cotton stump socks but later a Otto Bock Derma Seal Gel Liner. When walking this caused a massage of the sticked skinparts, although this hurted me during walking.
All together I used this prosthesis for more than half a year to my satisfaction. After some time however the changing of the stump volume caused socket fitting problems. 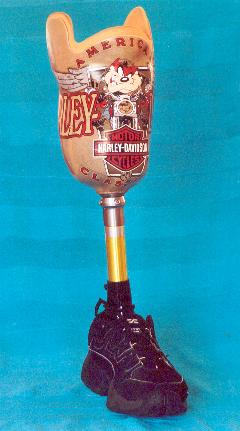 After fitting poblems with the second prosthesis a new one was made for me.
This model had a lower socket profile, a suction liner and knee suction sleeve with vacuumvalve in the pillar to attach the prosthesis at the stump.
During forming of the plastic socket a Harley-Davidson T-shirt was molded in, to improve the walking caracteristics.
A simple model foot was attached, without energy response, dampening or suspension. Mainly made for geriatric activity use. 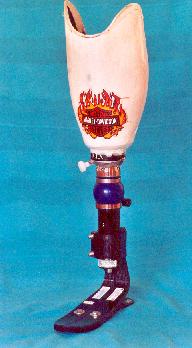 Whith my stump healed and sticking skinparts loose, time was right for serious work. The Dutch supplier of Össur-producs liked to demonstrate the Icex socket system and asked me to cooperate.
The Icex socket has a full-contact fitting on the stump surface, without real support spots. There's no inner socket.
The proces of making the socket is exceptional. By means of a vacuum pump a carbon-fibre sleeve is formed tightly around the stump. After about 5-10 minutes the sleeve is hardened into a socket. Total forming, fitting, finishing and attaching to the prosthesis system can take no more then about two hours.
Then the prosthesis is ready for walking! 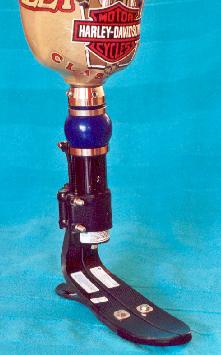 As soon as the road for a more active prosthesis was free, the most important choise was the kind of foot to use.
Searching the internet brought me to the FlexFoot models of Össur.
Among others (College Parks, Freedom Inn. Otto Bock etc.), this supplier of prosthetic products has a broad line of feet. My choise would be a versatile model for high comfort.
Well, the choise was quickly made: the VSP FlexFoot.
But when my prosthetist Martin Mulder of OIM "De Kastanjehof" asked information to order one, a brandnew model was just released by Össur: the Ceterus FlexFoot. New on the market!

Specifications were fantastic and the order was quickly made. But because of the very high price the health insurance company had objections, as expected. Motivation of Martin, together with my doctor's Klaas Vlaanderen took care of a positive descision: the application was granted, the foot was mine!
A fitting session was planned for the whole prosthesis in one time:, Icex socket with Ceterus and sportliner. 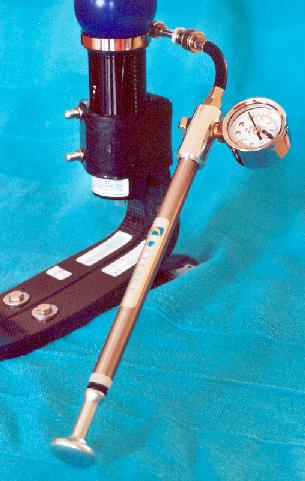 The Ceterus consists of two J-shaped carbon-fibre springs. A long one for the "toes" end a short one as "heel". The relation between the flextion of both springs is adjustable by placing different wedges betwwen them.
The Ceterus foot has a built-in adjustable airchamber providing shock absorbtion caused by effects of jumping or jogging.

Adjustments to dampening for normal use or very active use can be made by pumping up the pressure in the airchamber with an external manual pump (included whith delivery).
There is a rotation absorption as well, the distinct blue ball.
Rotating the body will cause the rotator to twist, and prevent rotation of the stump in the socket.
The total idea behind the concept is to compose a system that prevents frictioning or shoving of the stump in the socket as much as possible. 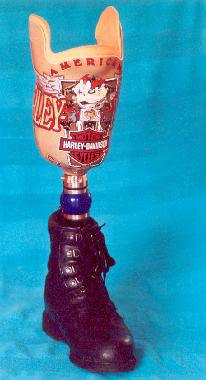 Walking on the Icex socket caused problems after a few months. I got calouses at the tibia point of the stump because of too much pressure, and this caused wounds. So the previous Harley-Davidson socket was attached to the Ceterus FlexFoot.

I walked on this composed system for almost half a year, until at that time the wounds wouldn't heal anymore and the risk of infections was getting to big.
I was also bothered by the rather high total weight of te prosthesis. The Ceterus is outstanding in performances, but not perticular lightweight. This caused cramps in my calf after short walks already: my claudication problems. As long as I suffer from claudication, a lightweight prosthesis is the best for me.


After 5 months of waiting: the "Seal-In Liner". 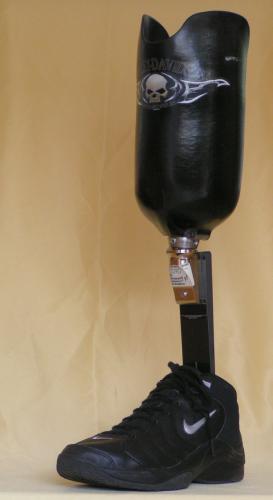 After the stump-reconstruction end of 2003 it took me 5 months to recover from the wounds and complications after the surgery. Only then it was possible again to wear a prosthesis.
The choise for a new prosthesis was the new Össur Iceross liner which could create a vacuum because of its build-in membrane. This makes the additional use of a knee-sleeve unnescessary. The whole system is lighter and gives more freedom in movement and fexability with bending the knee.
The idea was to make a light as possible concept which was flexible to wear. My prosthesist Martin Mulder took care of this system and provided it with a beautyful H-D design socket. 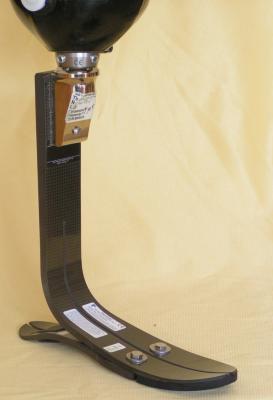 Excessive space in the Seal In liner.

Due to walking and exercising the muscle volume in the stump can increase gradually.
The prosthesis socket however is modelled on the moment I hadn't done mich for more than half a year with the muscles of my amputated leg.
This resulted in spots which got tighter (back of my knee), but also spots with more space as in the lower part of the stump because bodyfluids where transported better through musclemovement.

Adjusting the socket in the too tight spots created more space at the back of the knee.
The excessive space in the stumpvolume and in the distal areas can be filled up with stump sockets.

Important in this Seal-In liner system is, that the suctionhold of the liner onto the socked has to remain. So the sealing membrane must keep contact with the socket at any moment.
I solved this problem by cutting off a cotton stumpsock and donning it over the higher end of the silicon liner. I folded the rubber membrane ring over the cotton sleeve. The distal space I filled up with a small piece of cotton stumpsock.
You can make this solution yourself by simply cutting stumpsock in two pieces, nearly at the end.
Now Össur makes the upper sleevesock in various knits. I wear one since and ik works well because the rims are stiched and do not curl up.
They do not provide the distal cotton cup, but it's possible to use a thin polymer disk at the bottom of the socket. I tried this and it works well for me

For those, who wear a silicon Seal-In suction liner and strugle with too much play in their socket, I made some pictures to make the solution more clear: 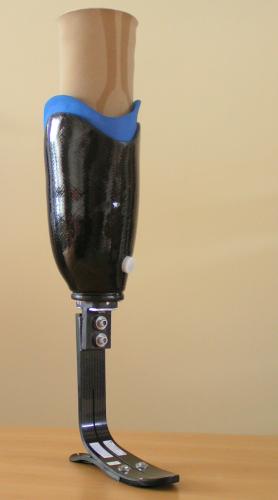 Pure frustration of every-time-damaged-stump withhold me to wear my prosthesis for months.
One day Össur asked me to act as testperson to demonstrate a Laser Measuring method. Afterwards they offered me to make a prosthesis system from this testsocket... ofcourse I accepted this gladly.
They made a "full contact" socket, also known as TSB (Total Surface Bearing). I kept the same Iceross Dermo Seal liner with the Seal-in suction suspension.
Special is the method to solve the typical problem of my stump, which is thickest in the distal end. A socket that gives room enough to step in with the thickest part of my stump, will always have too much room at the knee.
This excessive play around the knee can very well cause skin defects on the stump because of pressure and friction spots
By making a inner sleeve to put between knee and socket, a very stiff fixation is made which locks my knee in the socket. I never have used this solution but this motivation looks very logical to me!
After 5 weeks of walking the system works very well and seems succesfull. 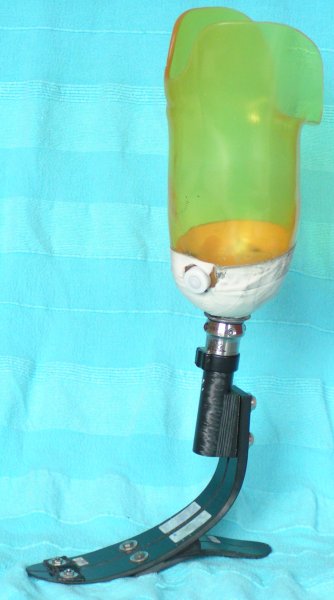 The most succesfull prothesis from my carriere began to wear out at the end of 2005. Cracked, torn and a to loose fit, repaired with Duct-tape... it was a horrible view.

My new prothesist Toufic of OIM "De Kastanjehof" made a new disign partly according to the conventional manifacturing method of plaster modelling; but formed with an Össur pressure bladder as well. He started by making a thermo-plastic test socket because of the difficult shape of my residual limb.
Because I didn't like to discart my old prosthesis and keep ik as a backup, I asked to attach my not used Össur FlexFoot model Variflex to the test socket.
A good decision because those few times I got sore spots I could rely on my old and trusted prosthesis.
The test socket was constructed to bear weight over the total surface ("full contact" of TSB) but it also had an obvious support area around the knee and the patella tendon (PTB systeem). The overall fit was very comfortable.
The liner remained the same Iceross 3 mm Dermo Seal with the Seal-in suction system.

At the biginning 2006 I had tried the test socket several months without any problems and the decision was made using the testsocket to make a permanent one. I asked to cast the socket with a special design of the most famous Harley-Davidson Rally in the world: the annual Sturgis Rally at The Black Hills of Dakota, USA.
I'm sure one day I will attend this unique event!
Because the Modular III Flexfoot is still my favorite choise, I asked Toufic to attach it to the permanent socket. 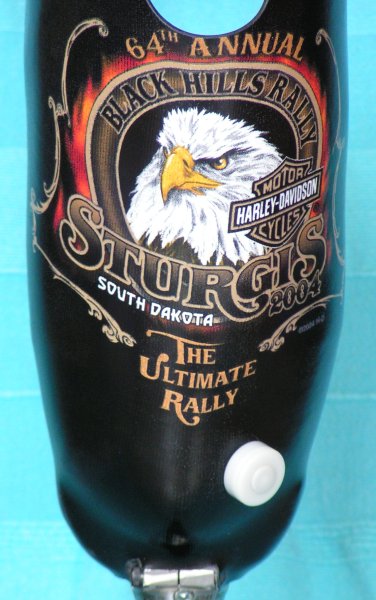 Rather naked than faked.